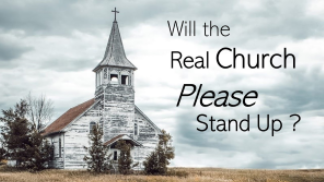 Will the Real Church Please Stand Up?

This past week the message was supposed to be a challenge and a charge for us to rise and shine for the glory of God.  We are living in a time when real Christians need to rise and shine. As you read through the rest of Hebrews 11, sometimes called the believers’ Hall of Faith, you will find names like Abel, Abraham, Isaac, Jacob, Sarah, Moses, Gideon, Barak, Samson, Jephthah, David, and Samuel and the prophets. You will hear of  those that we don’t really know by name, but we hear of what they did– they lived by faith. For some, it was a faith that led to their persecution and early death for the sake of their convictions–what we now call martyrdom.

The faith that the writer is talking about here, is not just punching our ticket for salvation. It is not believing that being a good person will earn you brownie points. Faith is only as good as the object or person in which you have placed your faith. This kind of faith is that which is based on fact. The faith of Hebrews is based on the promises of God; it is taking God at His Word. It is believing that Almighty God has a plan and there is nothing that slips by Him. I think for many, and I include myself here, we get comfortable in our safe haven of fleshing out our Christian faith right here in America.  There are people around the world that will DIE today because of their faith in Christ. Just like we can reflect on Christians that are in Afghanistan today, living under the reality that this might be their last day on earth. The Taliban is not the friend of Christians and they are not the friend of America.

It has been said that the blood of the martyrs is the seed of the Church. Hebrews 11:36-ff chronicles the myriad ways that early Christians were mistreated, persecuted, and killed. We may not hear about it on NBC or ABC or CBS or CNN or FOX, but there are and will be many martyrs coming out of the believers in Afghanistan and God knows every hair on their heads. What man would do to man and hide behind lies and darkness, God will reveal at the end of all things. And according to His good will, He may reveal them sooner. As we can read in the book of Esther, God will hear the cries of His beloved and He can turn tables overnight. With that said, let us appeal to Him and not get complacent in our cozy faith.

We may feel safe for right now, but we must realize that even our own nation is becoming less tolerant to the Gospel message and for those that have faith in it. I stress here that they are not tolerant of the GOSPEL. Why? Because it is the power of God that brings salvation. Our spiritual enemy, the one that drives the dark forces of this planet, does not stop opposing the Gospel. He will not let up. So the “systems” of the world that are in darkness, that are following their own way and not God’s may not be opposed to “religion” nor even Churchianity, a watered down form of Christianity that steps and fetches for the agenda of the cultural climate. Real Christianity comes from God’s Word. Do we believe it? Do we know it? Do we follow it? They do not want to hear the Gospel proclaimed and fleshed out. Cancel culture is making truth intolerable to those who will not hear what does not please them.

Let me be clear, I am not suggesting we stand on street corners shouting at passers by to “turn or burn!” That isn’t even what Christ or His disciples did. The time you read that Christ got the most indignant and “radical” was toward the religious elites of His day–The Pharisees and Sadducees–who wanted to control the masses with their form of legalistic religion instead of what God had communicated in His Word. They turned 10 Commandments into 613 and then hung them like a weight around the necks of men and women. For the common person, Christ had much compassion and care, bathed in truth. Christ was not about legalism, but grace. You see, He was the end of The Law in the sense that He fulfilled it–completely. He always aimed to offer humanity a changed life, a changed heart, not a perfect one. (Not until we see Him face to face will we know as we are known.) We are talking about a true realization of our sin, an end to behavior modification and legalism, acceptance of the payment Christ provided on the cross, and the desire to become more like Him in His love and mercy toward others. A better way, the BEST way to live this human life. Why would we be ashamed of that? As Paul states in Romans 1, “For I am not ashamed of the gospel, because it is the power of God that brings salvation to everyone who believes…”

We have generations of young people that are drinking the kool-aid of a minority of politically motivated radicals, armed to the teeth with media control and influence. They want to change the culture of our nation, and many are walking blindly with them, motivated by guilt, a desire to be politically correct and accepted, not really understanding the rhetoric that they are spewing. Let’s not be blind to the agenda that is being shoved down our throats and let’s not be blind to the agenda of the real enemy. Paul reminds us that we do not war with flesh and blood, but with spiritual powers of darkness.

We live in a blessed nation, with freedom of speech but we will quickly lose those rights if we just sit and do nothing. Evil prevails where good men and women say and do nothing to stop it. Pray for our nation, pray for our President, pray for our leaders. Pray for the Church, for individual churches and pastors, pray against this dark, anti-Christian mindset and the political philosophies that are set to undermine our nation, our freedoms, and our way of life.

Live for Jesus, let someone know this week – “I am not ashamed of the GOSPEL!”